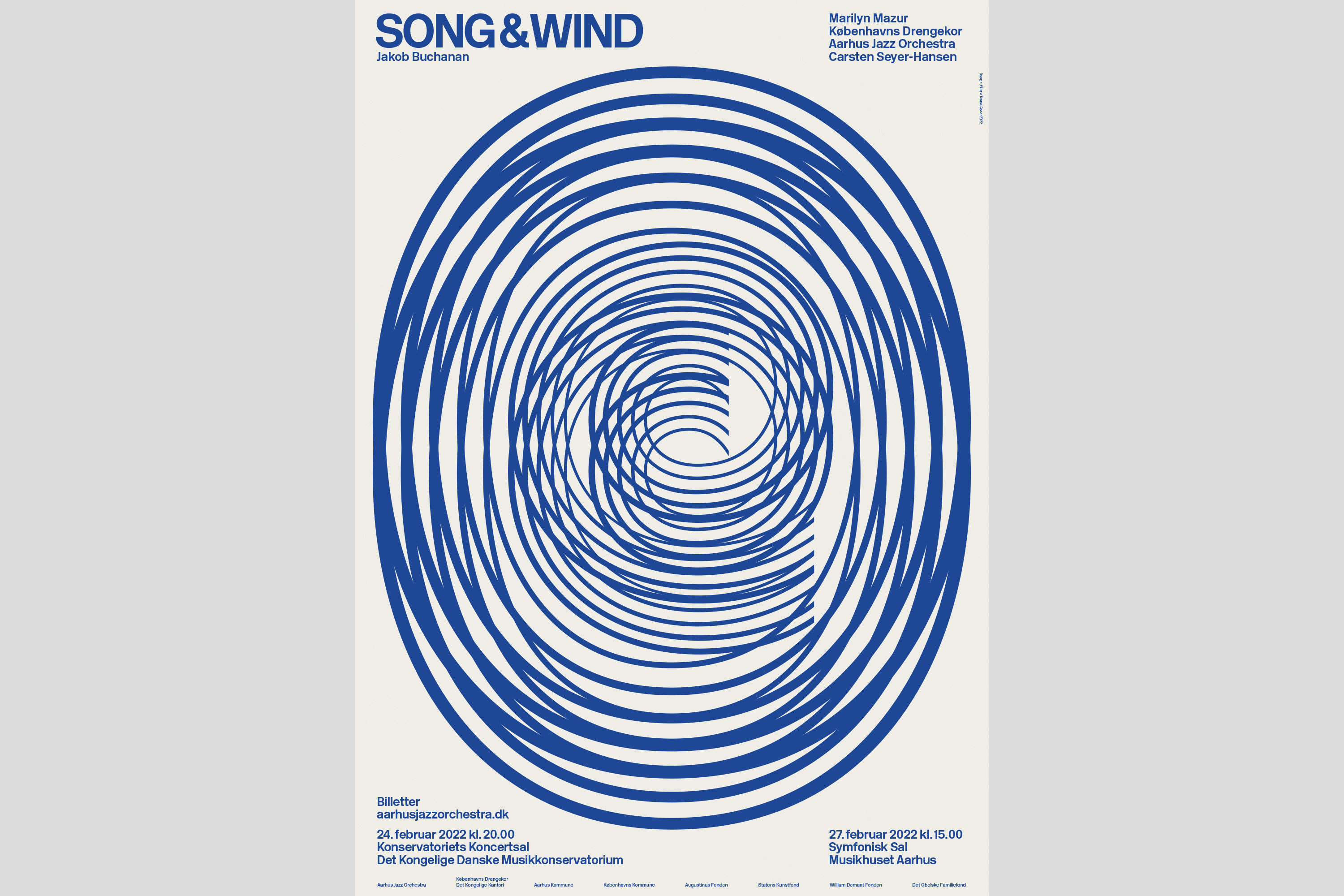 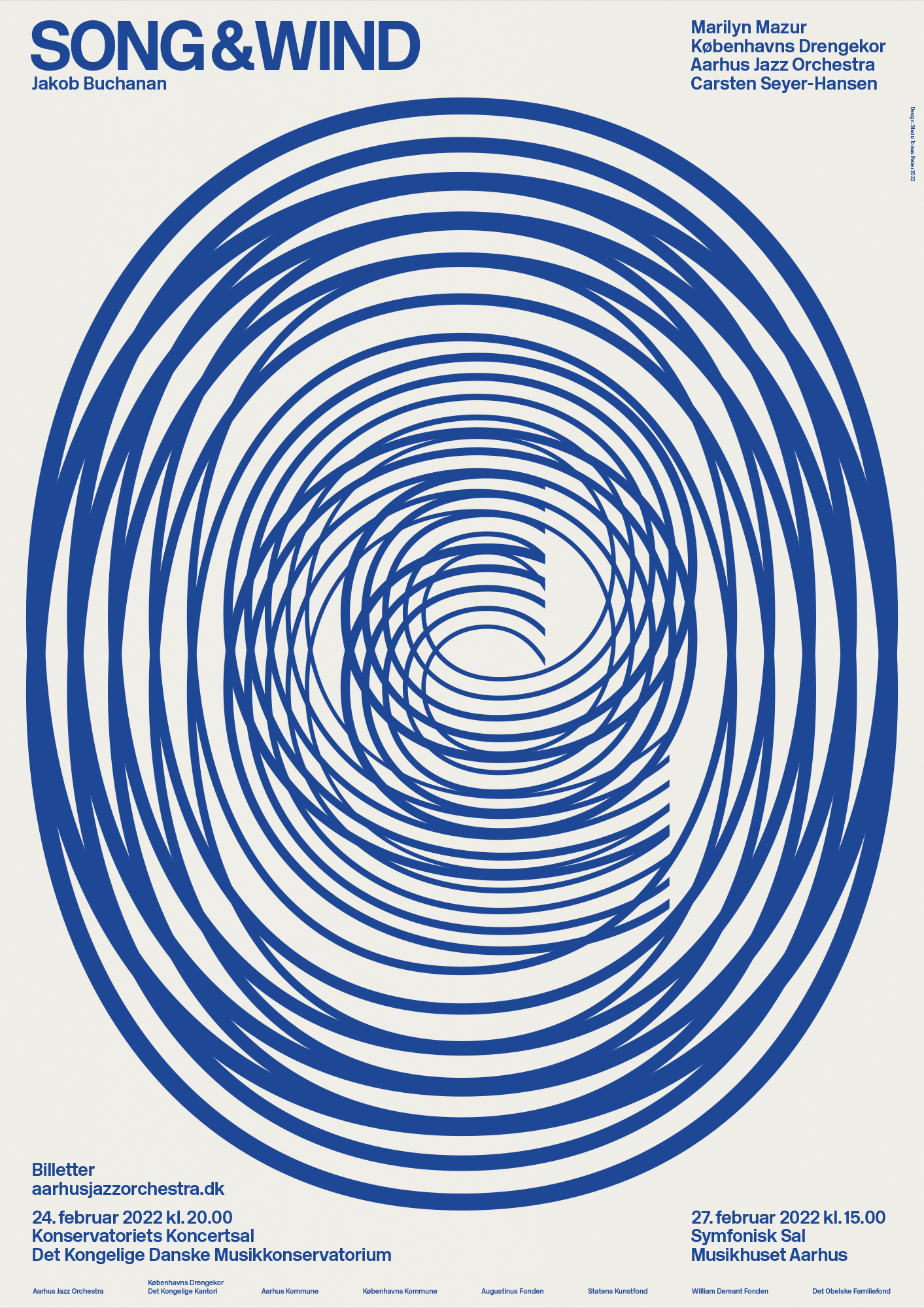 Jacob Buchanan is an award-winning jazz composer and trumpet player. He is also a return customer at Studio Tobias Røder. He was so pleased with the album cover we designed for his release On Rosenhill (Dacapo Records) that he asked us to do the poster for his concert Song&Wind as well. One of the reasons we like this poster is that we can’t quite explain it. But we can interpret it in many ways.

Done in collaboration with Jakob Buchanan. 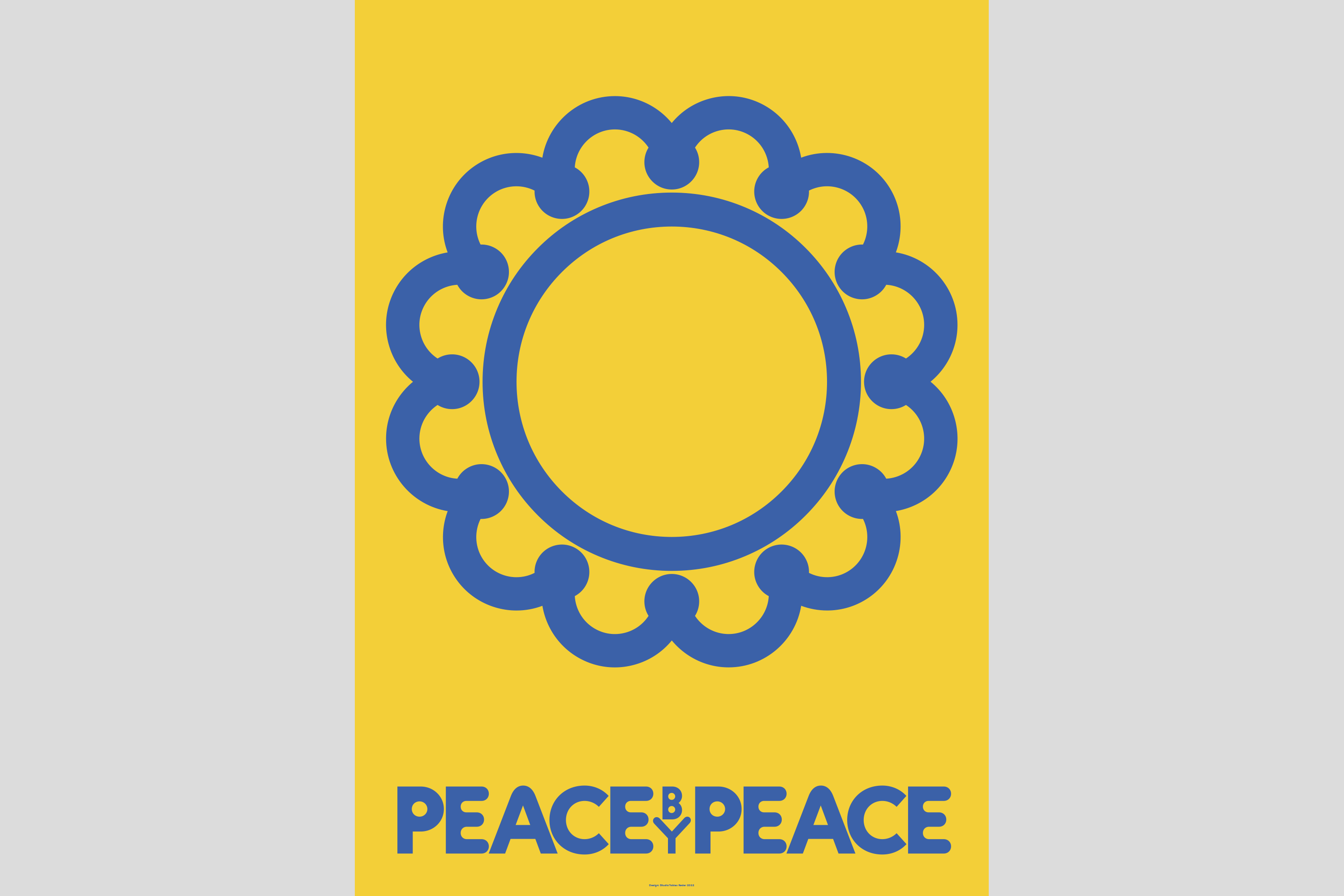 Tapping into the power of music

Musician Poul Krebs came up with this project in response to the war in Ukraine. Taking John Lennon’s immortal and tragically topical hymn Imagine as his starting point, Krebs decided to pass a baton to the world’s finest musicians, in order to write, create, and record a grand, united project. The idea was to make a song with the potential to spread a message of peace across all borders, even in countries darkened by censorship. In the best of worlds, the project would spread to other forms of expression beyond song, inspiring artists to pick up the baton peace by peace.

Done in collaboration with Poul Krebs and Henrik Juul. 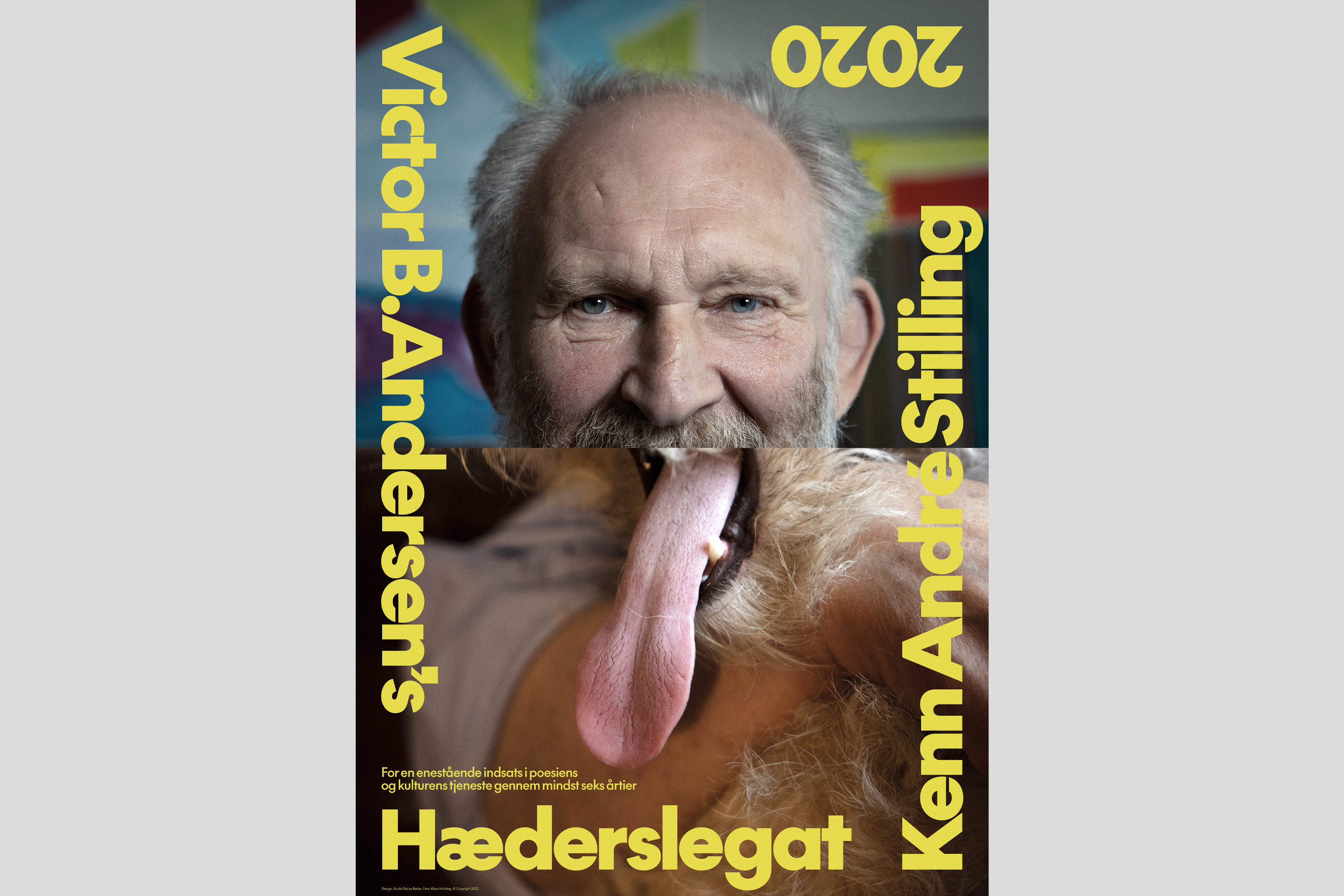 Visual artist Kenn André Stilling has published the cultural journal Victor B. Andersen’s Maskinfabrik since 1975. Over the years, a large number of Denmark’s cultural figures have received Victor B. Andersen’s Honorary Grant. Usually, Kenn André personally awards the grant to the happy recipient, but in 2020, in connection with the sold-out (special) edition 75, he was finally tapped to receive the grant himself.

Ken walks his dog Milou in Nansensgade, where Studio Tobias Røder is located, and we often meet him. So when we were asked to make a poster celebrating his honorary grant , we had no doubt that Milou should also be in it. 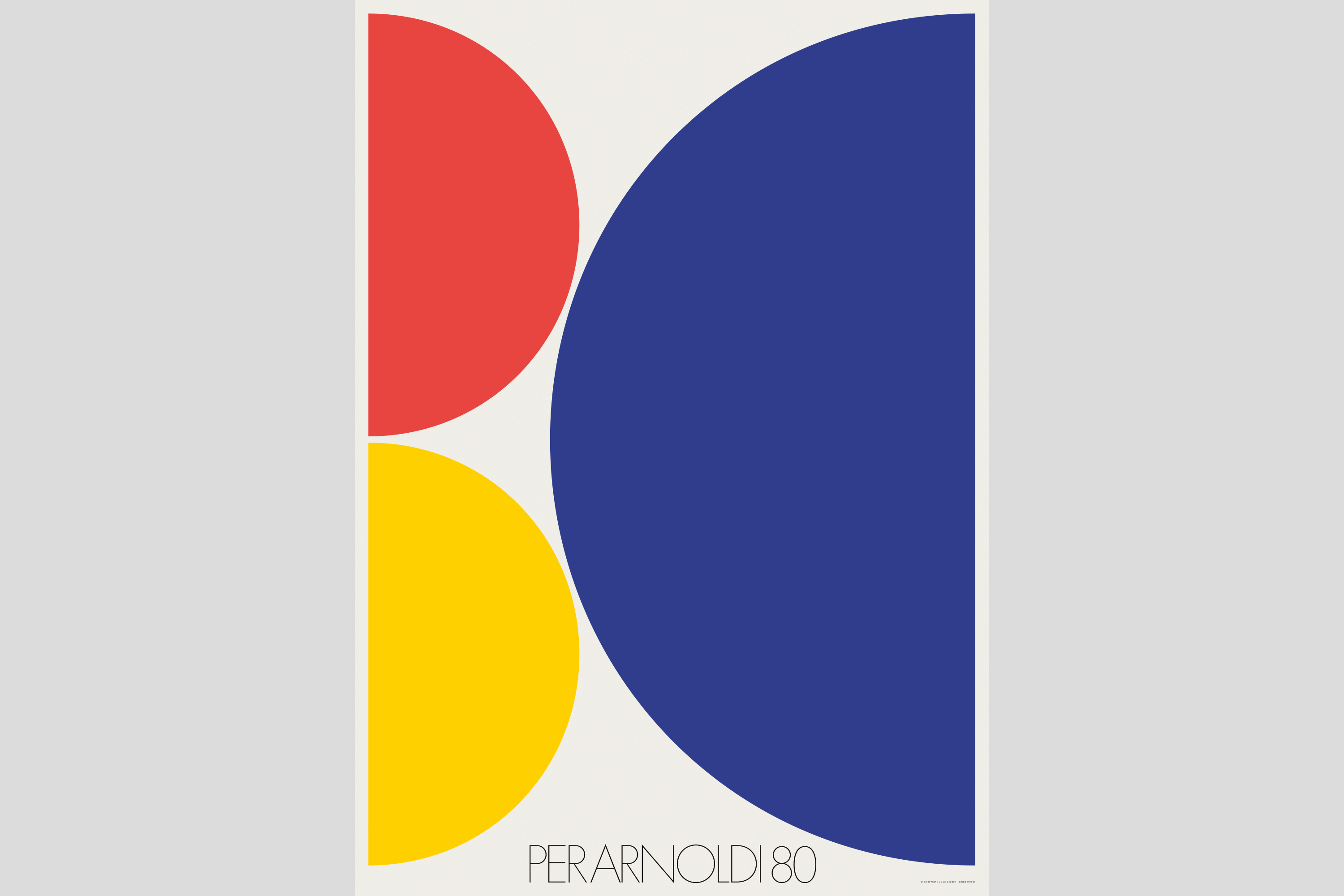 How to stay young

Per Arnoldi is a Danish world-famous modernist artist. His prolific production spans graphic assignments, decorations, paintings, and sculptures. He is considered one of Denmark’s most prominent poster artists, known for his tight and instantly recognizable style and color scheme: red, yellow, and blue. His favorite font is Futura. 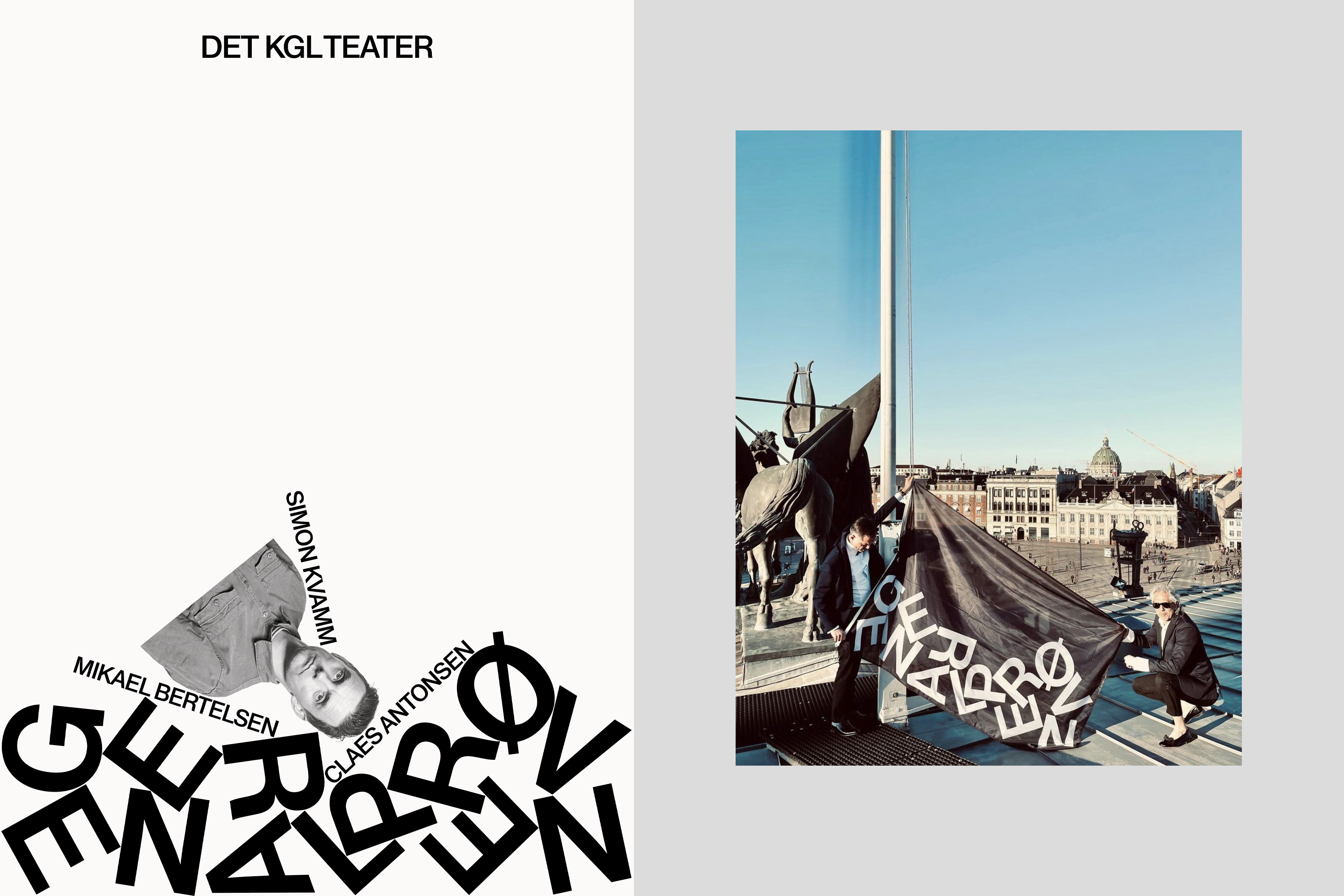 Generalprøven (Dress Rehearsal) is a live talkshow, equal parts music and conversation, in which a prominent Danish artist is interviewed like there’s no tomorrow. Legendary drummer Claes Antonsen and media mogul Mikael Bertelsen run the show. Anything can happen, nothing is rehearsed, and it all just might go wonderfully wrong.

Done in collaboration with Mikael Bertelsen and Claes Antonsen. 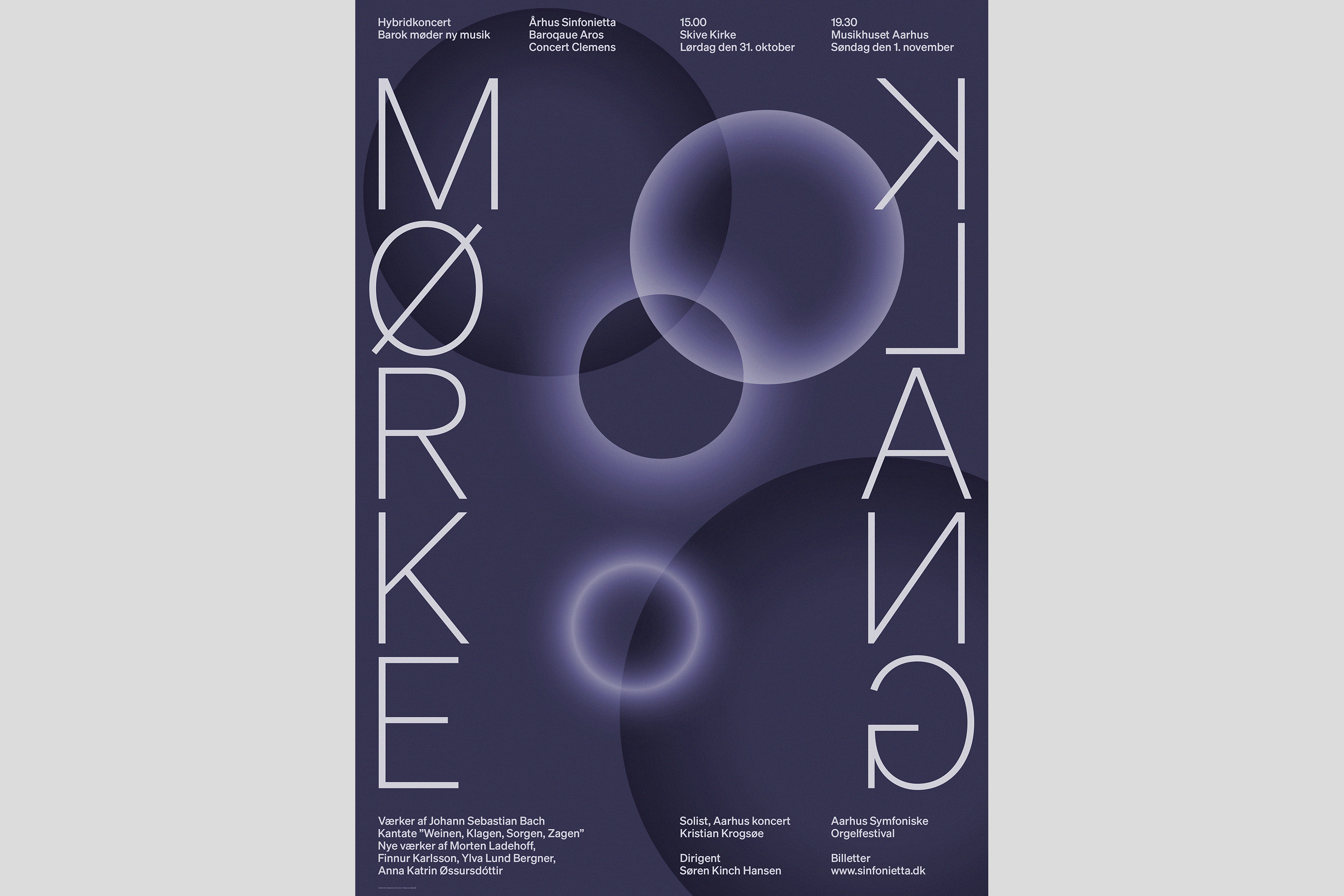 Music from the dark corners of the mind

Mørkeklang is a concert experience in contrast to modern society’s perpetual pursuit of happiness. Its poetic title is a made-up word that translates more or less as Dark Tone. The unusual concert takes the audience on a journey into the dark corners of the human mind, where reflection dwells and deep emotion lives side by side with atmospheric conditions that have no name. 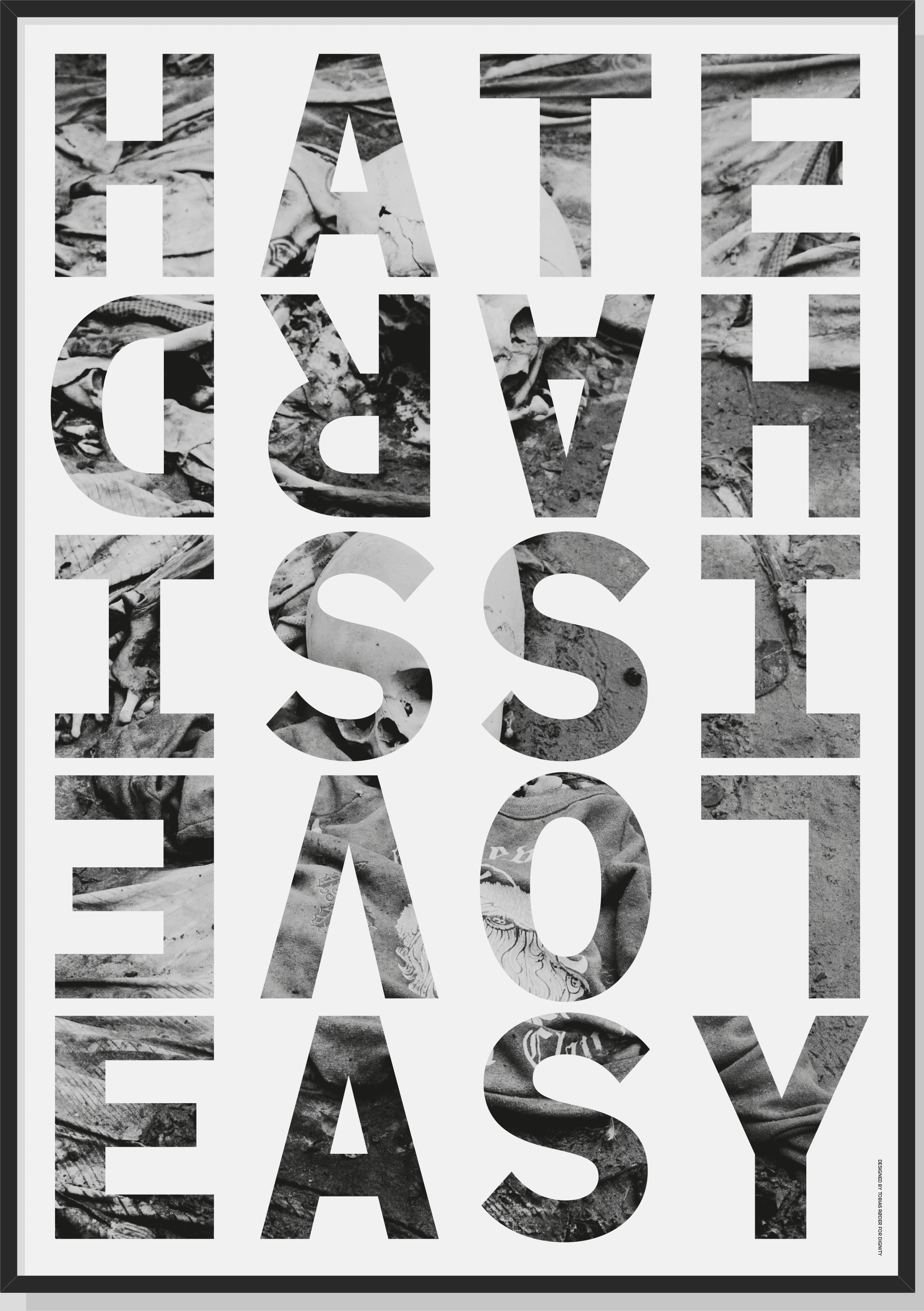 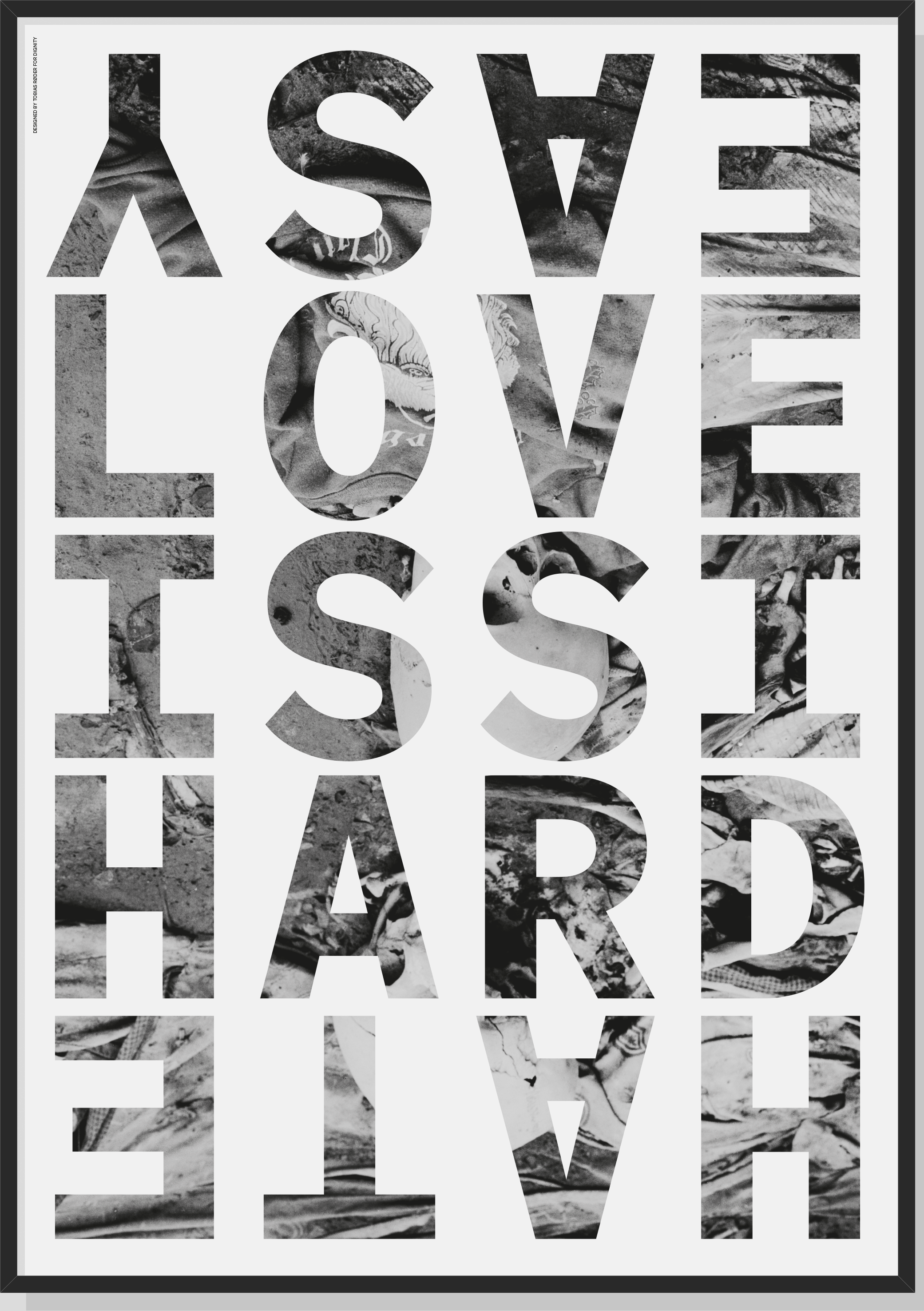 How to face brutality

The Danish anti-torture organization DIGNITY asked artists and creatives to donate posters in an effort to raise awareness against torture. We accepted the challenge, and veteran war photographer Jan Grarup generously granted access to his photo library for the project. But could a poster possibly change brutality? We decided to leave that up to the viewer. And so we created a poster that changes according to the way it hangs. (For typography nerds, it’s a treat. You’ll appreciate just how tricky it is to draw an S that can be flipped.)

The image inside the letters is one of Jan Grarup’s photos. It shows a group of children who have been hacked to death with machetes. One of them is wearing a T-shirt with the words: “I believe in Santa”. 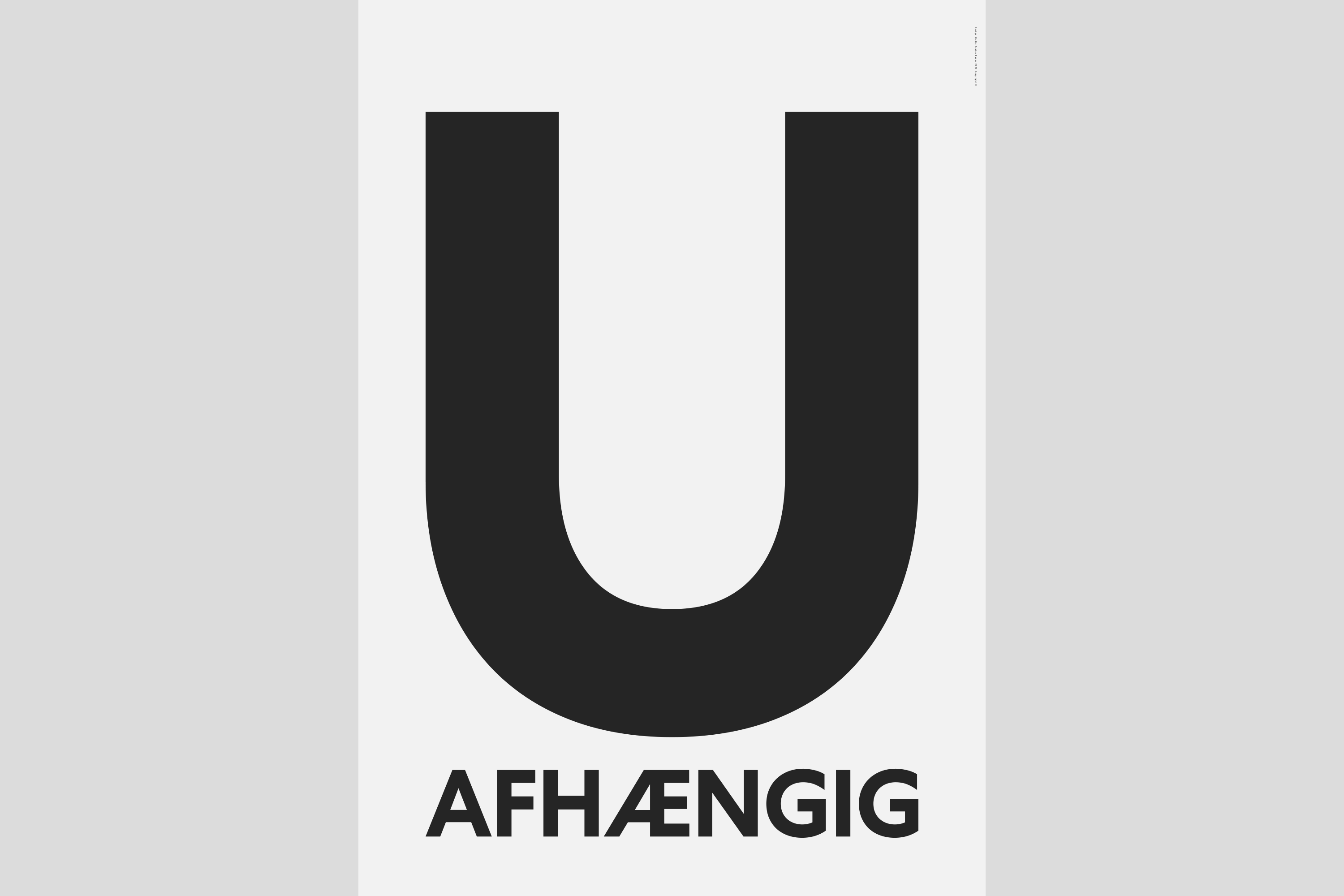 How to stay independent

Born in the wake of the political shenanigans that closed down Radio24syv, Den Uafhængige calls itself “the only Danish talk radio that the politicians can’t shut down”. The station began broadcasting live updates during the COVID pandemic and since became a morning radio focusing on critical in-depth reporting, financed exclusively by its listeners. Den Uafhængige means The Independent in English. 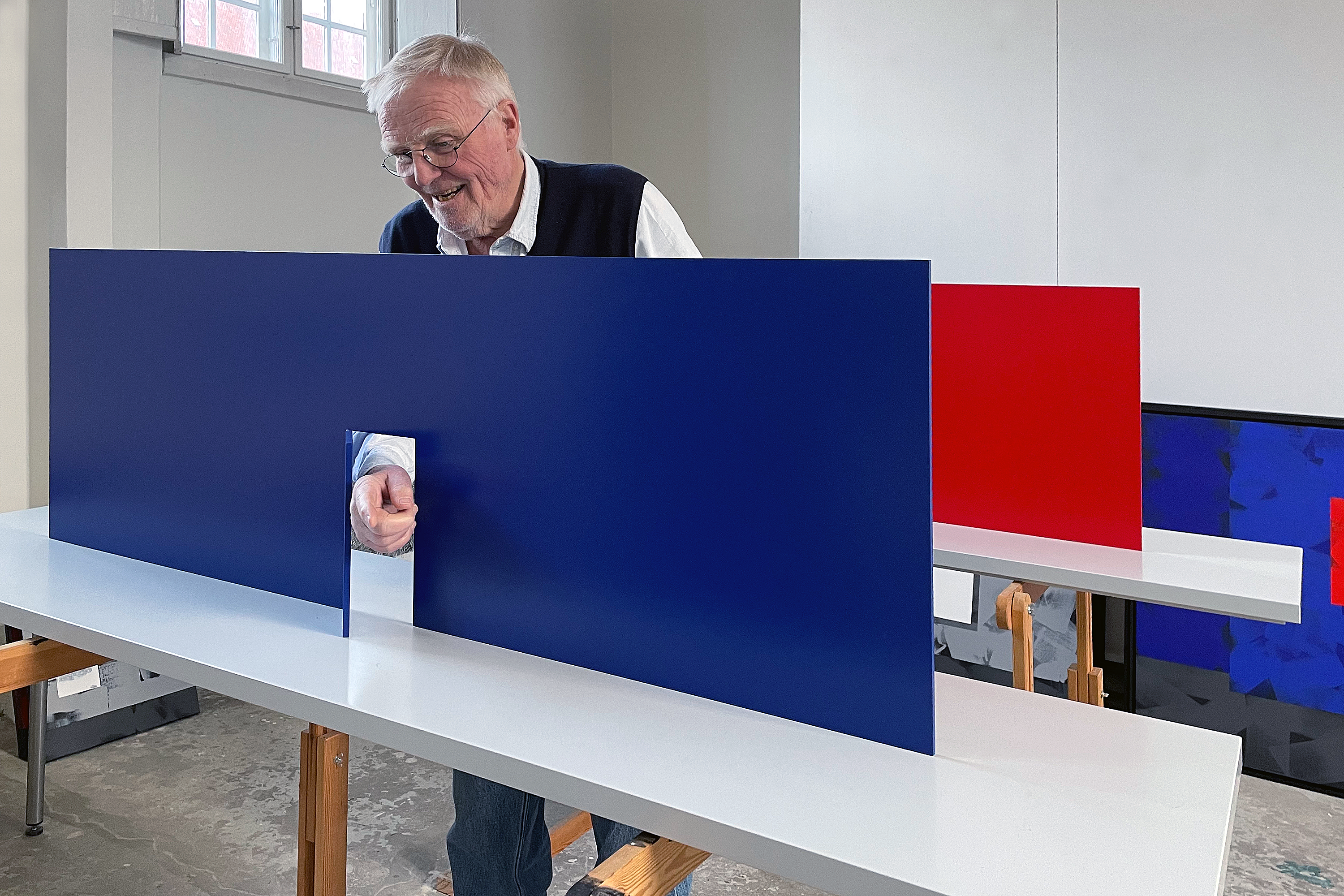 On the art of saying no

In response to Donald Trump’s border wall, Per Arnoldi created a sculpture showing that where there is a wall there is a way. Initially, in addition to just the sculpture, he wanted to exhibit a series of posters. We were advisors to the gallery, and we said: “No.” Arnoldi then asked if he should design the poster promoting the exhibition. We said: “No, we’ll do that.” The headline, of course, reads: Per Arnoldi exhibits 1 sculpture.

Done in collaboration with Victor Stilling. 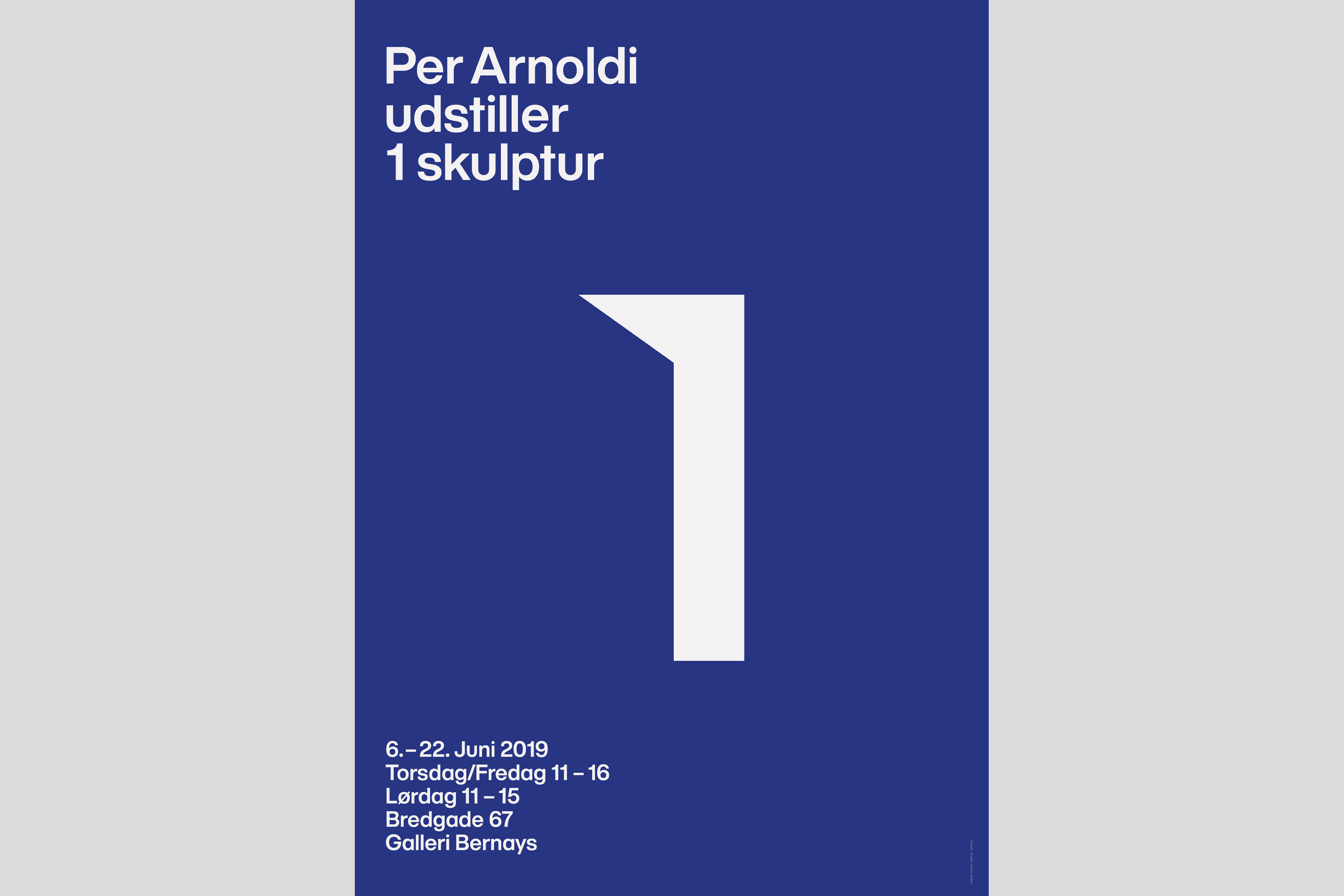 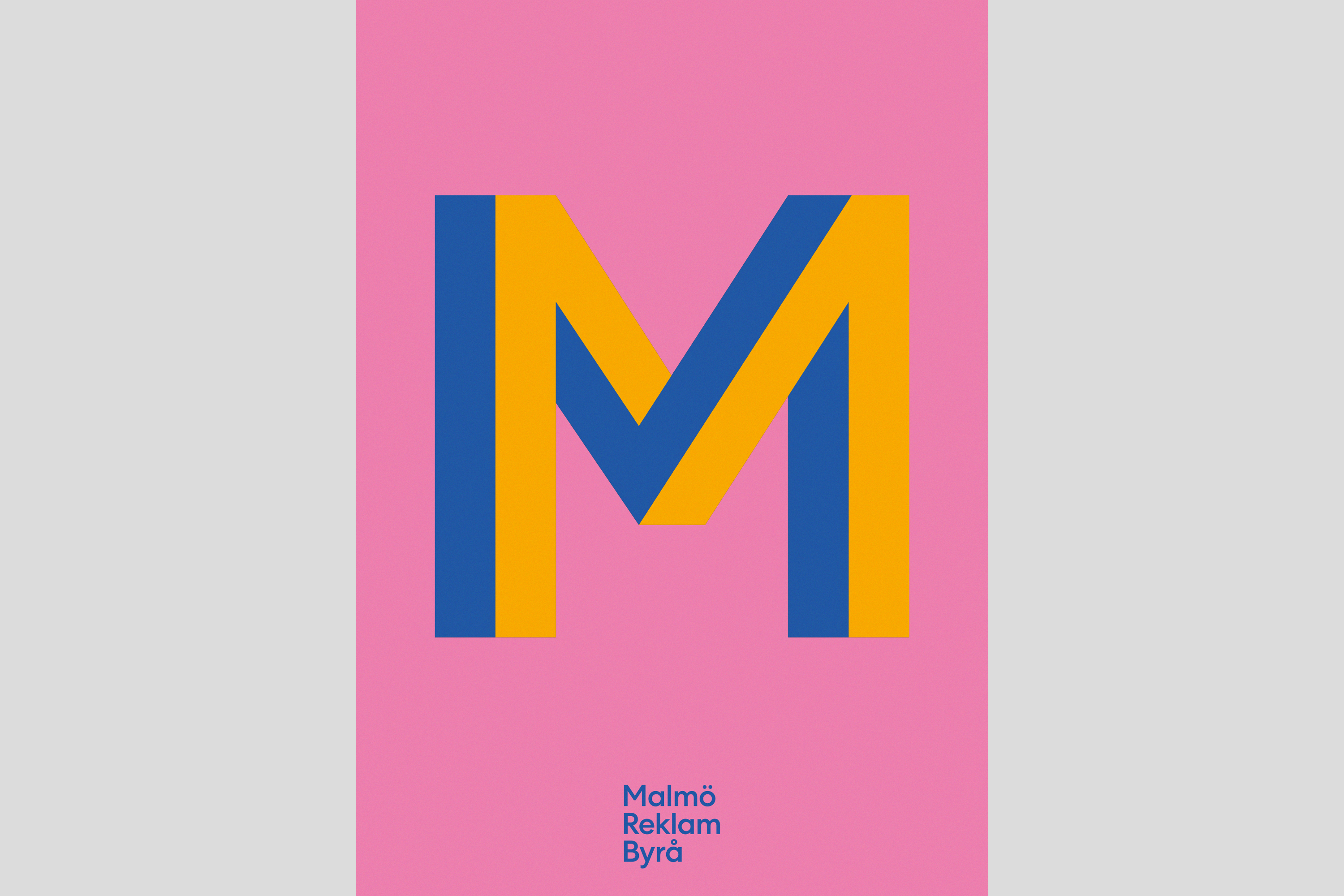 A story of impossible possibilities

Malmö is an industrial city in South Sweden that has been forced to adapt to a new era. With its eyes to the world, Malmö has long welcomed outside guests, and allowed itself to be influenced by them. Malmö is home to Sweden’s youngest population, comprised of a unique cultural mix, in which one in two inhabitants has at least one parent born outside the country’s borders. Malmö has great socio-economic diversity, and its inhabitants live closely side by side. Is it without friction? No. Are there challenges? Definitely. Is it the future? Most likely.

Done in collaboration with Gustaf Hultberger. 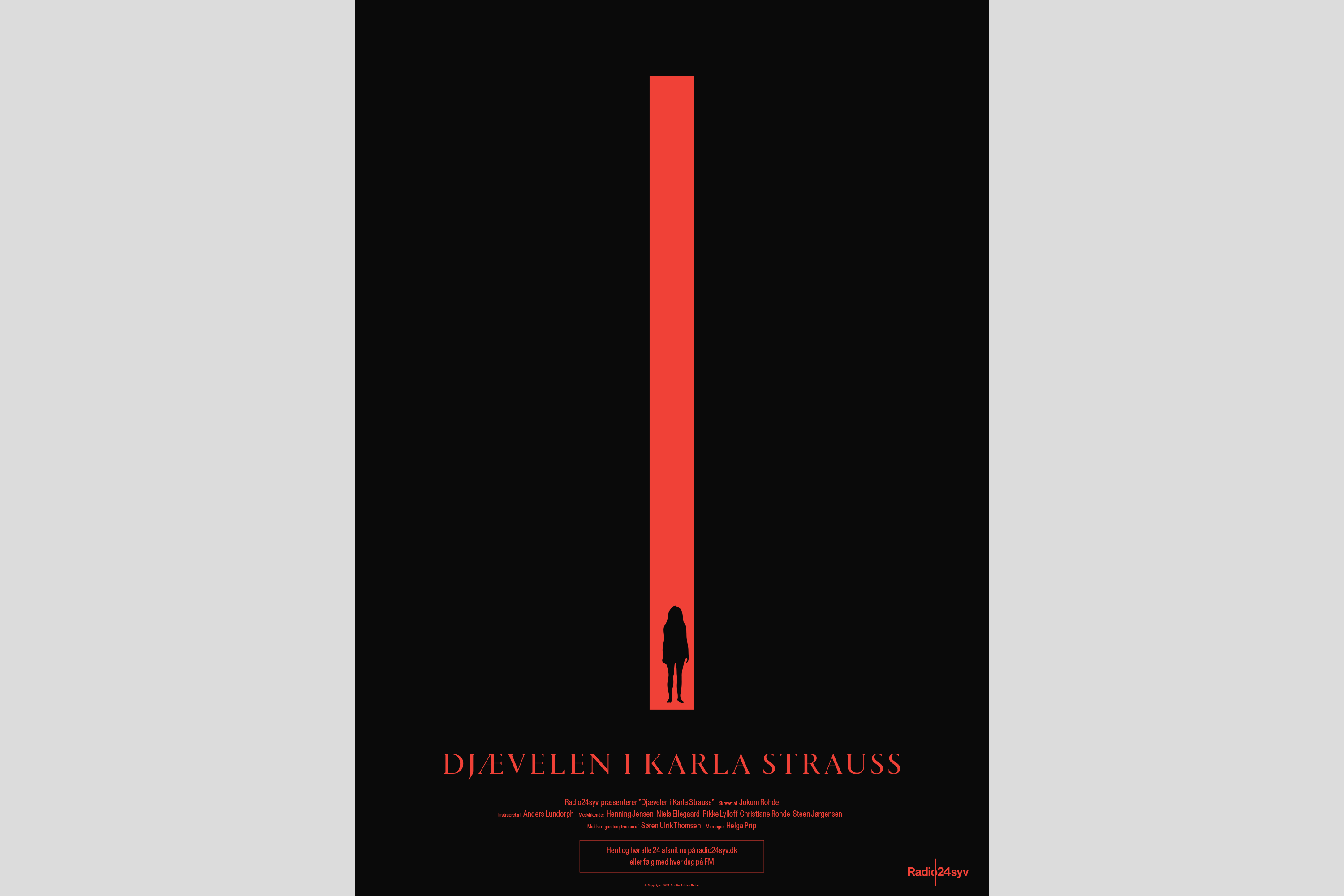 A Christmas calendar for the wicked

This is the story of what happens when you make a deal with the Devil. In return for riches and success, the young actress Karla Strauss sells herself to the Devil. But when it comes time to pay her price, she runs off.

The Devil in Karla Strauss, written by Jokum Rohde and directed by Anders Lundorph, was Denmark’s first-ever Christmas calendar for the wicked. 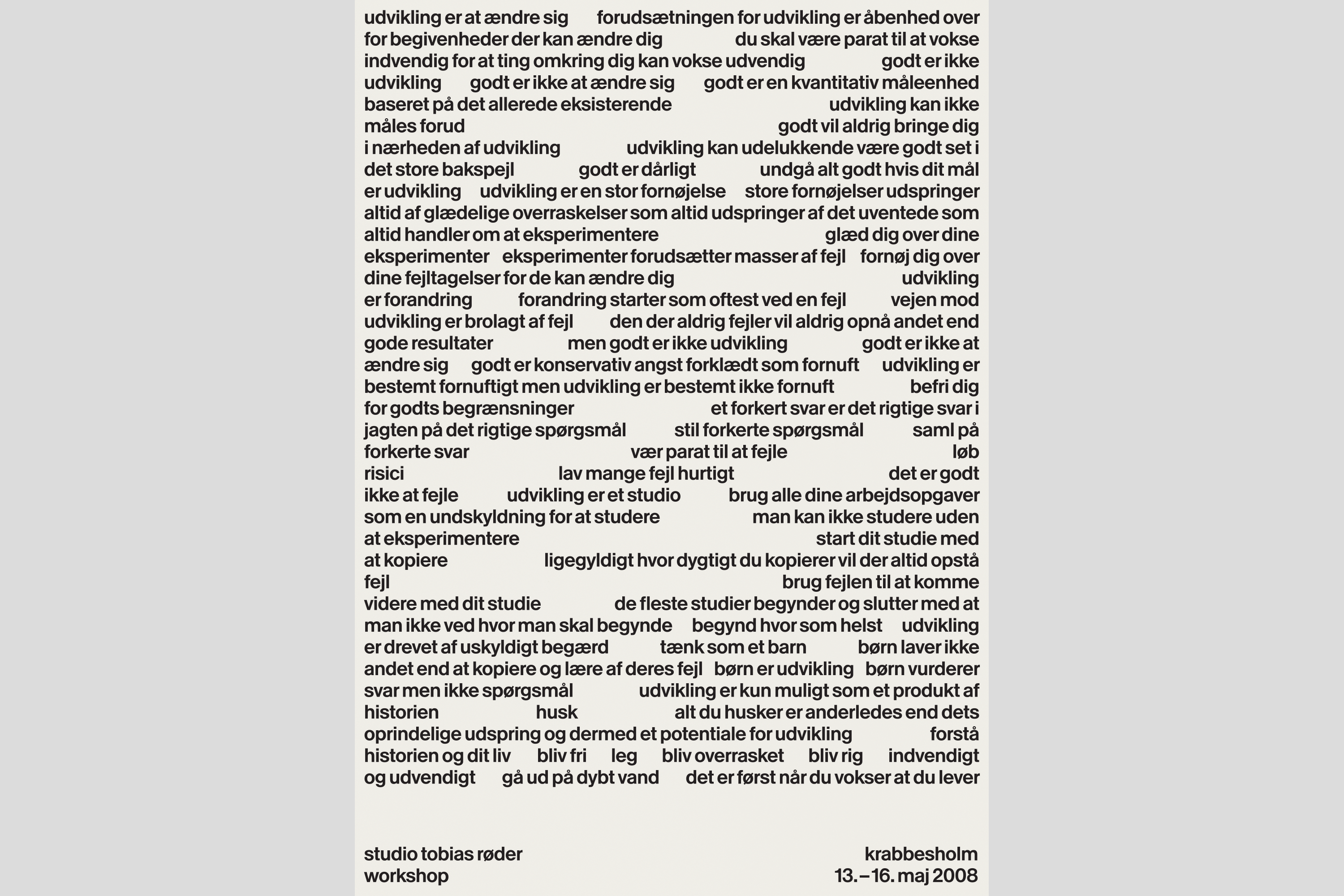 How to make the most with the least

This was one of our first workshops, and, as such, it needed a poster. “I had just read Bruce Mau’s Incomplete Manifesto for Growth, and I was so excited by it,” recalls Tobias Røder. He sent a copy to adman Claus Skytte, who promptly translated it into Danish. “And I then took the Danish text and translated it into Tobias Rødersh,” he says. The result was extremely limiting — and liberating. “We used only one typeface, all the same size, all black, only small caps, and we set ourselves the challenge: How do you still make it make sense?”

Done in collaboration with Claus Skytte. 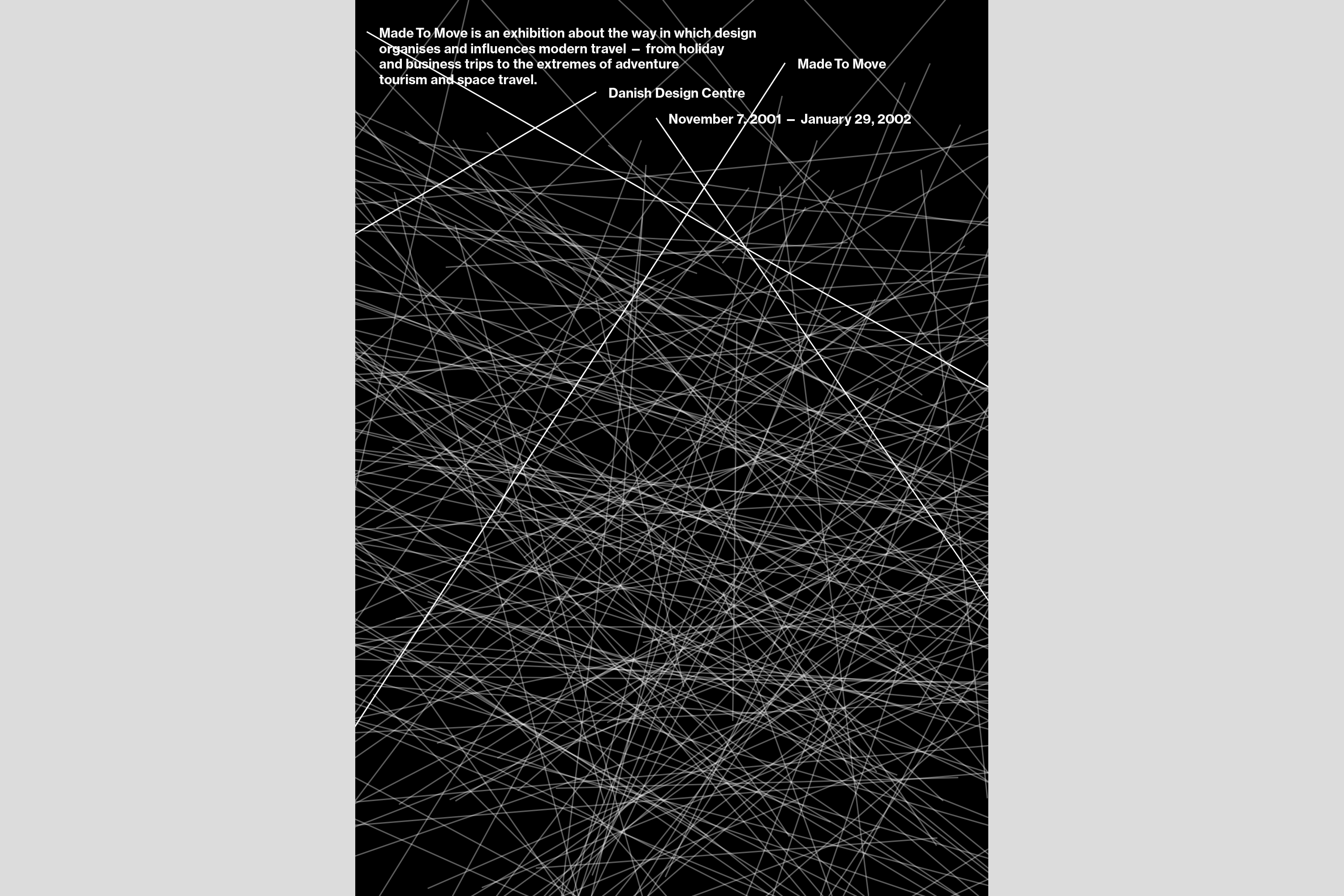 A journey into design

Danish Design Centre asked us to do a poster for an exhibition on travel — from package holidays to hiking — specifically on the role that design plays on the journey. Because of the many different forms of travel involved, we decided to simply illustrate the concept of travel as a journey from point A to point B. This became the many lines in the poster, which we then used to highlight practical information about the exhibition as well.

Done in collaboration with Peter Bundgaard.